Working in the motor pool turned out to be a pretty good job. The guys there took me under their wings and became my over-protective big brothers. And the motor pool sergeant decided it wasn’t all bad to have a friendly female face to come to work to every day.

As the days and weeks passed, I watched myself change and grow into a new person. I no longer felt like the young naive girl from Idaho. New countries became my home as traveling and adventure became my life.

Europe was beautiful and fascinating, a glow of sparkling jewels inside a newly found treasure chest. Sporadic moments of loneliness where overcome with awe and wonder. 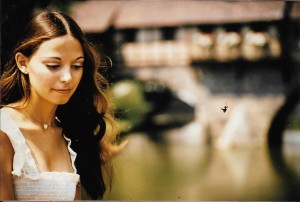 In the market on Saturday morning in Nuremberg, Germany

I was a stranger a long ways from home, lost and found at the same time. I had ventured into a new age leaving all childhood behind, never to be touched but only remembered.

I felt like the princess in all the fairy tales I had heard as a child, living only a few blocks from a centuries-old castle, this was my time.

One Reply to “My Own Fairy Tale Land”